Somersault Athlete of the Week. Jan and Tania

In our 3rd edition of Athlete of the Week (AOTW), we have Jan and Tania. Every time we get a submission for an AOTW, we're reminded that we have some amazing people that attend our events. If you, or someone you know, would be a good candidate for future editions of AOTW, please send a photo and a bio to Adam@velofix.com.

Thank you to Jan and Tania for this wonderful submission and for coming back to do Winterman in 2022. If you want to join then at Winterman 2022, you can get more info at https://www.somersault.ca/events/winterman

About Jan and Tania

We are a married couple from Regina, Saskatchewan and have been running marathons since 2013. Between the two of us we have run 241 marathons or ultras and 130 half-marathons. Most of the marathons were in North America, but we have also run some in Europe, Asia and Africa.

However, you won’t find our names in the record books or see photos of us on winner podiums. We are back of the pack runners, enjoying the social aspects of marathoning. We enjoy meeting new people and exploring new places as we run.

Our “best” accomplishment would probably be running 8 marathons in 8 consecutive days in 8 different USA states with a group called Mainly Marathons.

Coming from the prairies, winter running is not exactly new to us. The first week of January we have an event put on by our running club, Marathon Matters, called Cure for the Brrr. That is usually the opportunity to run your first marathon of the year. It is a 4km looped course around Wascana Lake, a man-made lake in Wascana Park, an urban park larger than Central Park in New York. The temperature can be anything between 0 degrees Celsius and -40 degrees Celsius and the path covered in ice or 20cm of fresh snow.

As we do not exactly enjoy training for a marathon or doing long solo runs, we prefer to do races as long runs in preparation for our next marathon. It is not easy finding marathons in Canada during the winter months and that is how we discovered and end up running the Winterman in 2019.

We had so much fun doing the event in 2019 that we decided we will have do it again. The event was well organized and the race director and volunteers outstanding. It cannot be fun standing outside in the cold for six hours, smiling and telling runners they look good.

Due to the pandemic this event, as most other events, was cancelled last year. Since March 2020 we could only do three in-person marathons (Queen City in Regina, Calgary Marathon and The Blue Nose in Halifax). As the restrictions are getting lifted, we started looking for marathons. And to our surprise, Winterman was the first one to announce an in-person event early in the new year.

With such a responsive Race Director as Adam Kourakis (he replies within minutes to your enquiries) and the added bonus to run a marathon in our nation’s capital and be part of the annual Winterlude, visit Parliament Hill and the Terry Fox statue we didn’t hesitate to sign up. Looking forward to February 20, 2022.

Attached two photos of us after the 2019 Winterman, a photo of us at The Queen City Marathon in our hometown of Regina, Saskatchewan (local Boston Qualifier annual event - www.runqcm.ca) and the two of us in our natural winter habitat. 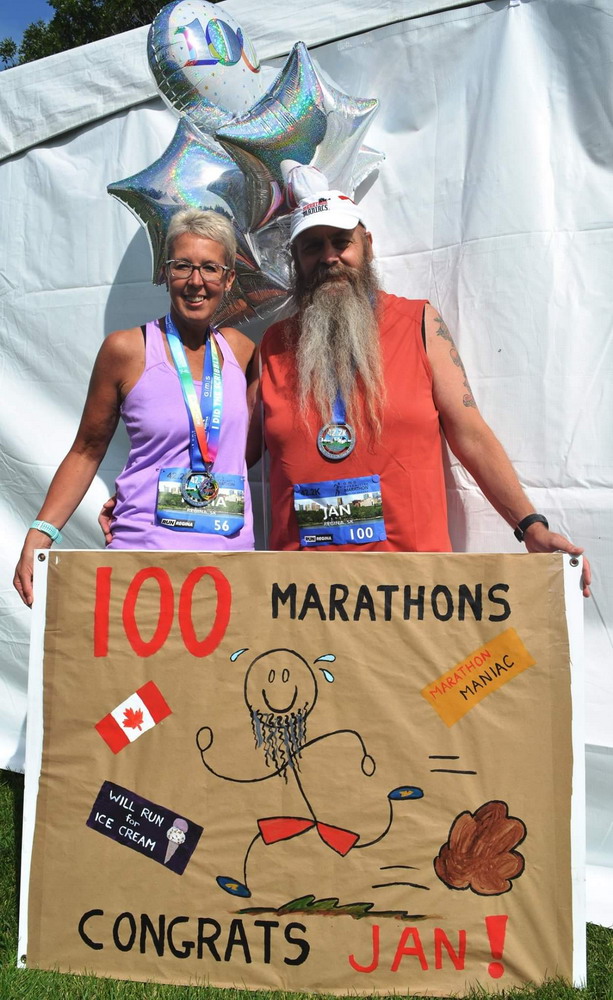